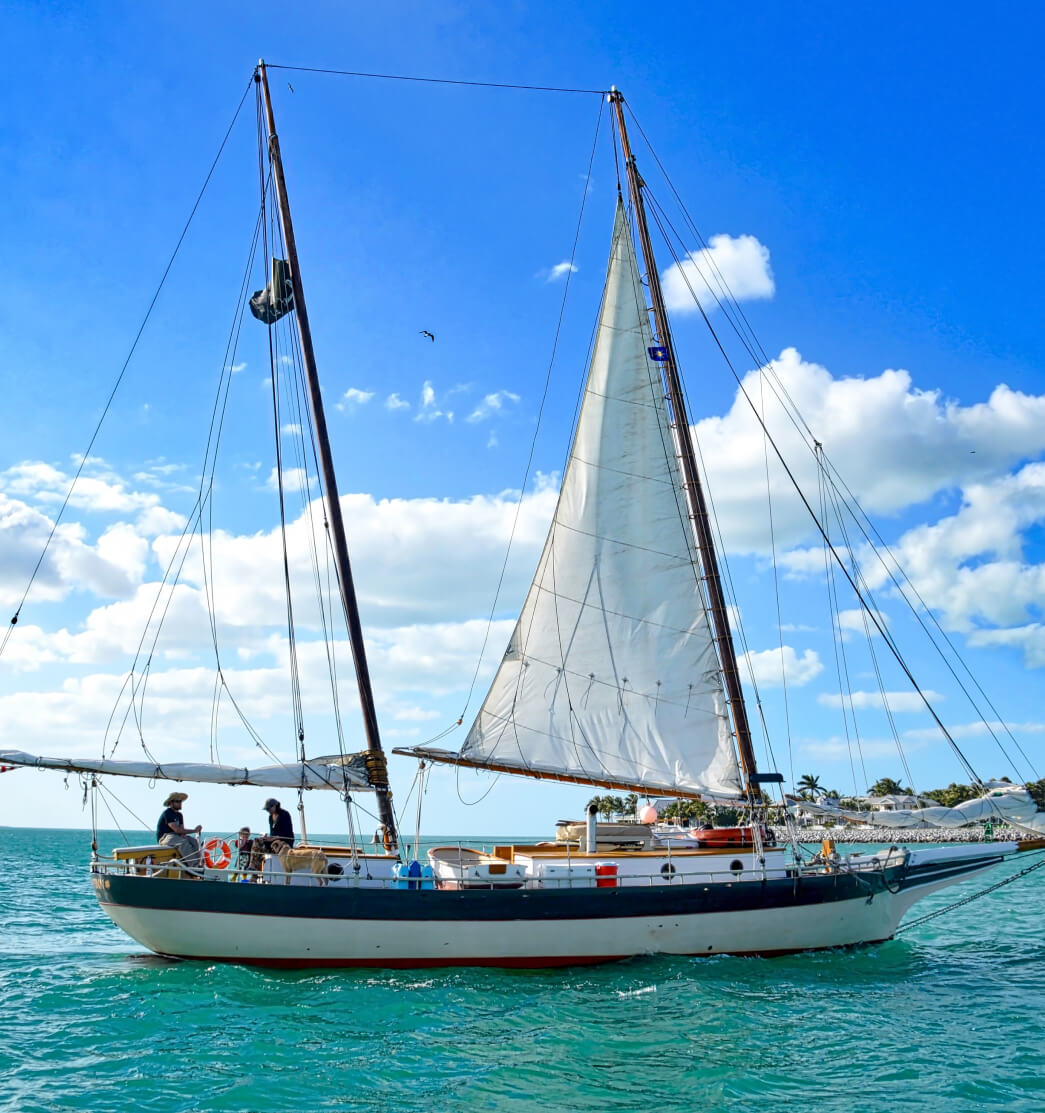 The Last of Her Kind

The Appledore Star is the last known bugeye schooner to be built. Legendary shipbuilder, James B. “Mr. Jim” Richardson of Lloyds, Maryland, designed ships with a …”view to the past, which sought to rediscover, preserve and pass on methods used by craftsmen of previous generations.” Richardson Maritime Museum Home Page When Richardson retired from an esteemed career of building boats for others, he decided it was finally time to build a boat for himself.

With an eye to history, Richardson wanted a boat with a pedigree that was also easy to sail. Spending time around Chesapeake Bay, Maryland he was familiar with a schooner style sailed in the 1800s for oyster dragging. Needing a shallow draft, log canoes were originally used for oyster dredging but were too small to handle large loads. Bugeye schooners were designed with a centerboard design that allowed them to sail in the Bay’s shallow waters while a low bulwark made it easy to handle dredges and drag for oysters. As the oyster harvest declined, the bugeye schooner dropped out of favor and was replaced by the skipjack, a less expensive design for oyster dragging.

There are many ideas of how bugeyes got their name. According to the Mariners’ Museum in Newport News, Virginia, Chesapeake Bay – Watermen – The Mariners’ Museum there are two leading theories. One is that the numerous Scottish immigrants living around Chesapeake Bay referred to oyster shells as “buckies” which over time became “bugeye”. The other theory is that the name comes from the boat’s appearance. From afar the hawse-holes at the bow of the boat look like a bug’s eyes and the bow sprit looks like a nose.

With a round stern, raked masts, and a centerboard, the bugeye schooner has a distinctive design with a simple rig to sail. Having decided on the style, in 1983 Richardson built his wooden two-masted boat by hand. The boat was a true labor of love and he named her the Jenny Norman. He spent his retirement years sailing the Jenny Norman on Chesapeake Bay.

Following his death, the boat was sold and neglected for a decade. The Jenny Norman was rescued in 2000 when a skilled shipwright, Mike Rodgers of Maine, bought the boat. Mike and his wife, Julie, poured their hearts into the Jenny Norman succeeding in bringing her back to her former glory. They obtained Jenny Norman’s initial US Coast Guard Certificate of Inspection and started running charters with the schooner in 2003 out of Rockland, Maine.

One of the guests, Bill Noonan, went on an overnight voyage in 2007 with his sons on the Jenny Norman. The experience stayed with him, strengthening his family bonds while enjoying freedom from everyday technology. He realized that many families would appreciate a similar adventure and bought the Jenny Norman to charter in the Cape Cod Bay.

Re-naming her the Lucky Finn after his young son Finneas, a clover was added to her jib. Mr. Noonan started a weekend cruise company running sails along the Massachusetts coastline. In late 2015 the Jenny Norman/Lucky Finn would change hands again and head south to Key West to join Sebago’s fleet of wooden schooners. Sebago chose the name Appledore Star for her in keeping with the Appledore identity. This name is derived from two of the islands that make up the Isle of Shoals straddling the Maine – New Hampshire border. Appledore is the largest of these islands in Maine and Star Island is the largest in New Hampshire.

Appreciating the family bond of the Lucky Finn, Sebago kept her lucky clover. With Appledore Star’s round stern, wide beams, and clover jib, she cuts a beautiful sight on the water. When in Key West, be sure to look for her distinctive clover sailing high every day across the calm, blue waters as the Appledore Star seeks out another adventure.

To learn more about Jim Richardson and the history of traditional wooden sailing vessels on Chesapeake Bay, visit the Richardson Maritime Museum in Cambridge, Maryland. Trailboards from the Jenny Norman are on display at the museum. 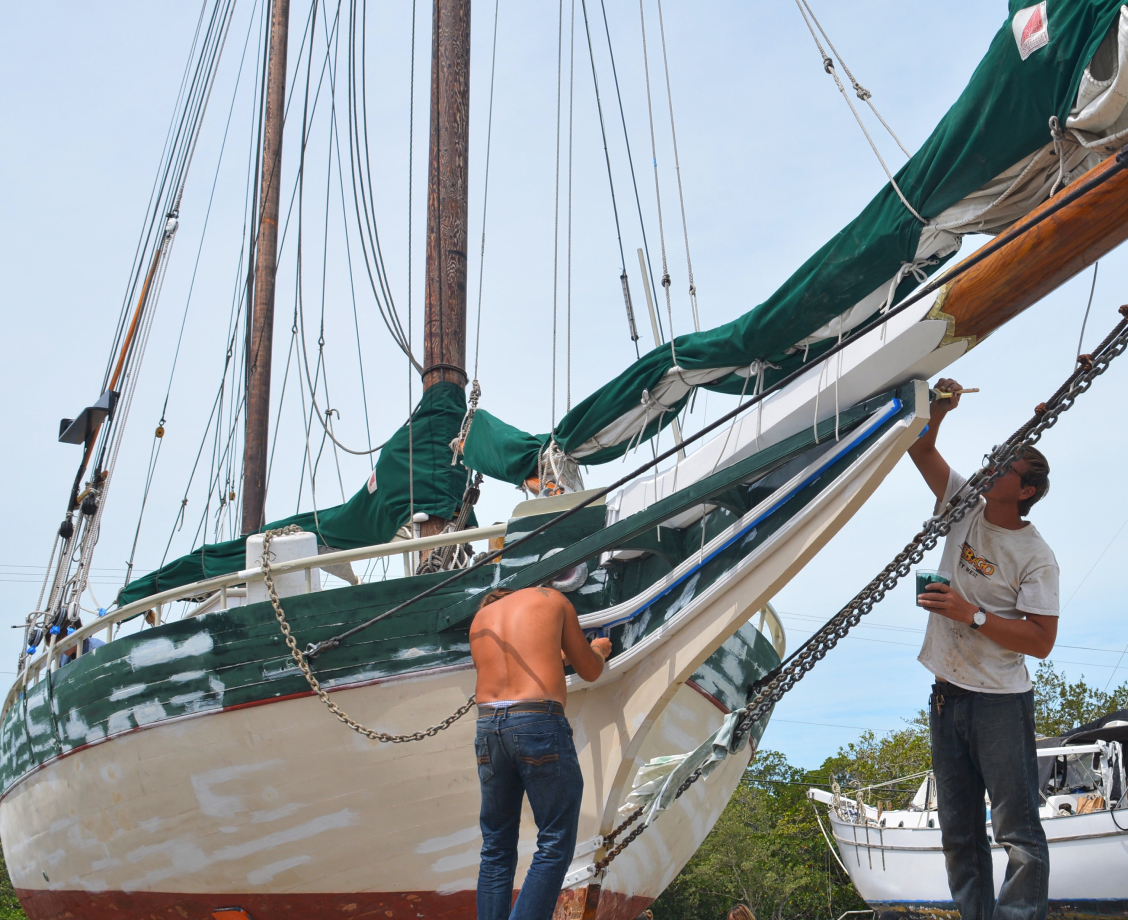 A fresh coat of paint and maintenance updates take place in the Stock Island shipyard. 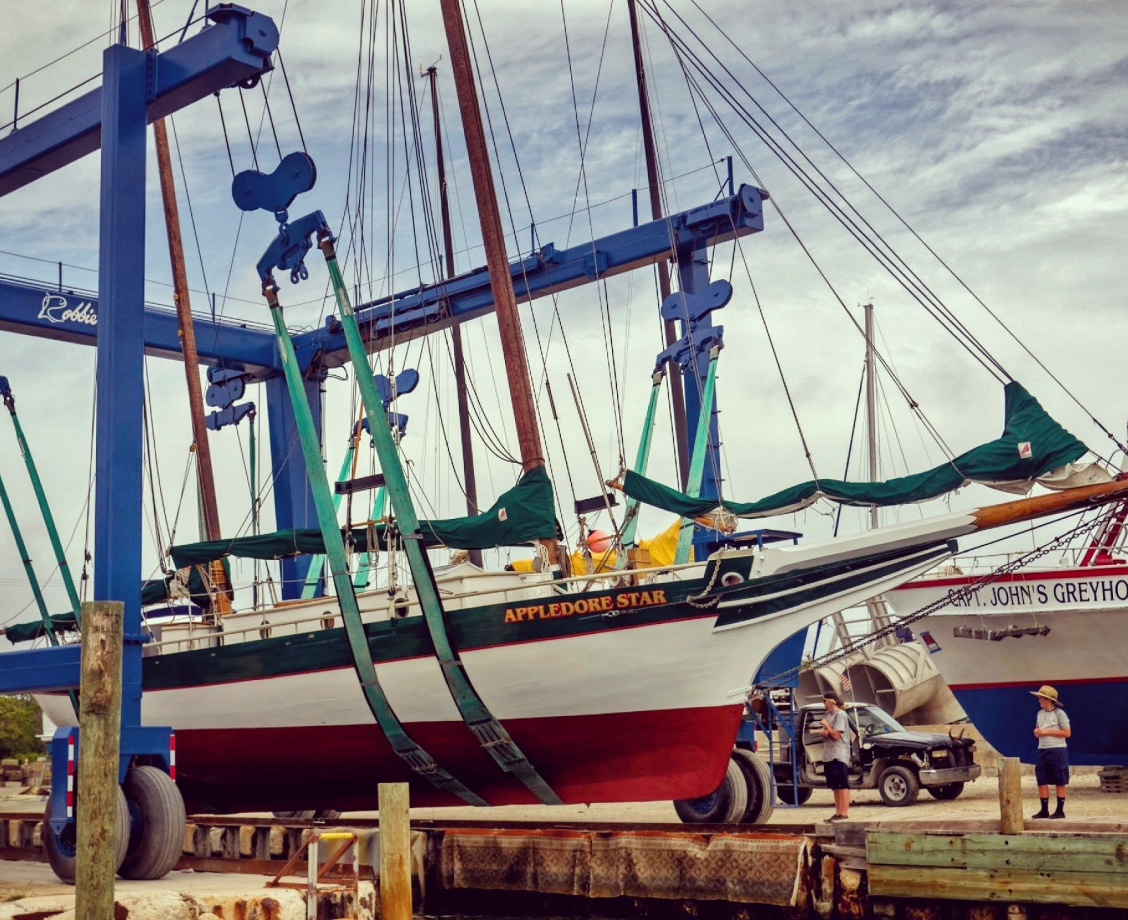 Draft with Centerboard Up